The very last of something 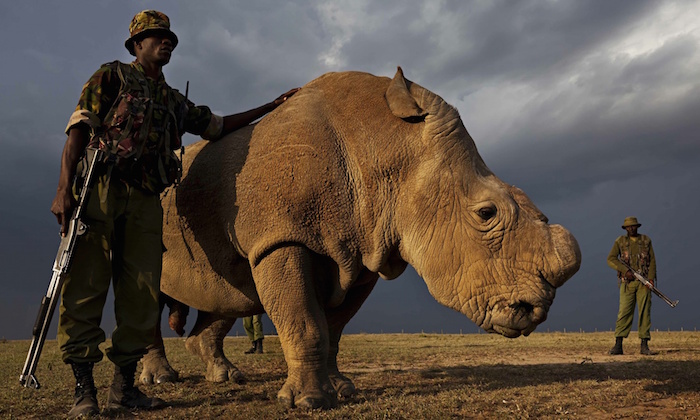 There hasn’t been an article like this for a while, that fills me with such feeling of sadness, and emptiness. For as long as I can remember, a cartoon I saw as a child started my attraction for rhinoceros. Such lovely animals!

And now, the one pictured above (CB2/ZOB/Brent Stirton/National Geographic) is the last of his kind. Who do we have to thank for that? Us. On a comment to the article, a poster under a “Gordo Granudo” pseudonym writes:

If you teach people that there are magical forces in the world, that general framework of belief will metastasize into the most repugnant superstitions imaginable.

When you believe in magic or lords or gods or wizards or spirits or spooks, then consequences of the natural world become decoupled from reality as anything can always be rationalized in some supernatural context: “… well, it must be god’s will after all …”

The fact we will all live to see the extinction of a creature as noble as this can be traced back to one, single failing in our collective human condition; superstitious ignorance. Don’t teach your children of Easter bunnies and tooth fairies. Teach them of the even more immensely magical world of giraffes and the things that can be seen in a microscope. Teach them not of the supernatural “magic” of miracles, but the real magic of science. Teach them of human history, not 2000 year old fairy tales. This rhino? This is the consequence laid most bare of the ugliest manifestation of human superstition. Perhaps it isn’t as profound as all the human suffering caused by wars, motivated by precisely the same intellectual failings, but it stands as the starkest possible reminder that we as a species have, within our power, the ability to manage our world, or destroy it through ignorance.

It could not have been said better.